Matt Shlian has a way with folded paper. His fascination with geometric, 3-D forms and interactive art is leading him to collaborations with scientists and retailers alike. Attractive wall hangings, small sculptures and art books by Shlian are available through the Ghostly store and through Eight Emperors, a subscription series run by Matt and his partner, Thea Augustina Eck.

Out of this excellent body of work, we are most excited by the kinetic sculptures and flip books. Movement best showcases the complexity of these folded and layered forms, and betrays Shlian’s talent as an engineer. 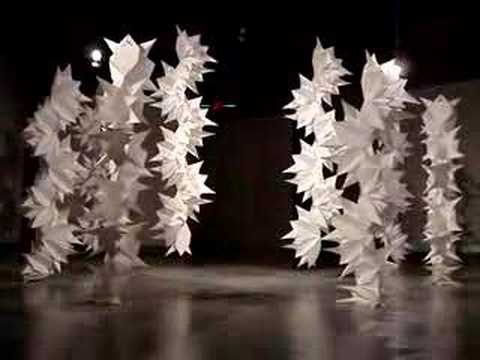 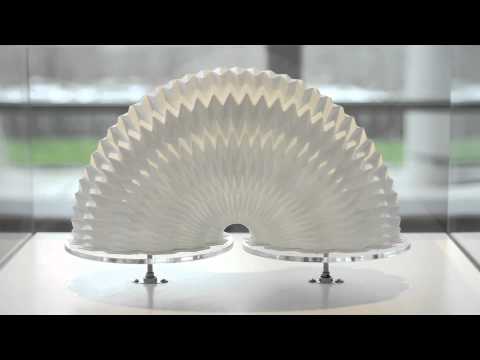 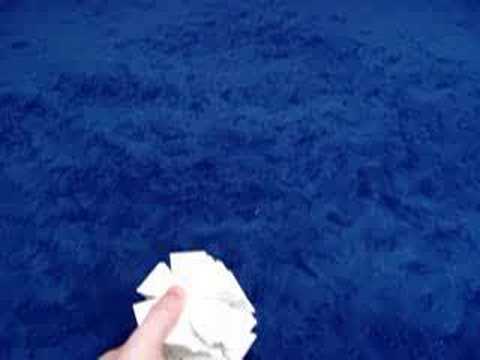 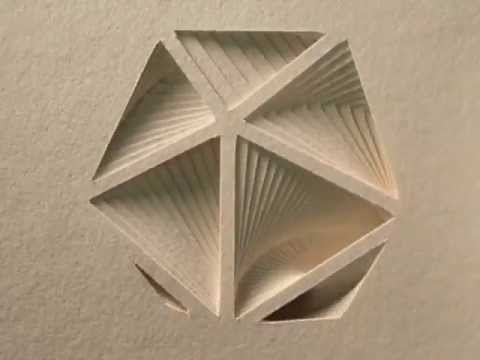 Even just watching this guy fold paper is mesmerizing. Shlian will be teaching a course on paper sculpture at Haystack this summer.

This is the second issue of THE STATE, a print journal from Dubai experimenting with the translation of online information consumption to a book form. Lejla Redja is the designer of this issue, in which essays are folded and tucked into pockets of a two-spread folio.

Dubai, a place where “announcements become architecture within a matter of months,” is an apt place from which to meditate on speculative geographies. The essays of volume ii meander from Brasillia to London to Indonesia to Accra, but all revolve around contemporary understandings of place.

THE STATE announces issue topics in advance and accepts submissions. They also blog. Volume ii is available at Printed Matter.

After a chance encounter at the Boston Antiquarian Book Fair, we have become fans of Klaus-Peter Dienst, a German calligraphist who published Rhinozeros magazine out of Hamberg in the 1960s.  His collaborator on the magazine was his brother, Rolf-Gunter Dienst.  Rhinozeros was a  literary magazine, mostly in German, that occasionally featured Beat writers.  Klaus-Peter did all of the calligraphy for each issue, sometimes incorporating a German translation of English works onto the page.  Jed Birmingham is a William S. Burroughs biographer who has made the whole Rhinozeros archive (10 issues) available online.

Photographer Richard Misrach and Landscape Architect Kate Orff of SCAPE Studio have collaborated on a book, newly out on Aperture.  Petrochemical America features the landscape of Louisiana along the Mississippi, in which quintessential southern communities neighbor ground zero for the country’s petrochemical industry.

The book pairs Richard’s site photographs from Cancer Alley with Kate’s “ecological atlas,” a set of analytical maps and diagrams that bridge Richard’s specific, local images to larger environmental and economic systems and timelines.  Read a long-form interview where they discuss their collaboration here.

In addition to analysis, Kate’s team also assembles a glossary of concepts for change.  Although the exhibit is now closed in Aperture Gallery in Chelsea, you can buy the book from Aperture.

We acknowledge that no photograph taken from the floor of a club with a handheld device has ever, in the history of camera phones, ever been good, BUT we could not resist:

Amon Tobin just passed through town with his giant stage sculpture projection environment AV experience show: ISAM Live 2.0.  While the beginning of the show was a little heavy on the space station imagery, the projections got better and more abstract toward the end.

still from this video

still from this video

There are way better images of ISAM, plus an interview, over here.

As a thing becomes “tired” as soon as it is identified to as existing in the world, projection mapping has, in some circles, traveling the circuit to passé via hipster jadedness.

The relentlessly prolific and inspiring Kyle McDonald, has developed mapamok a free open-source projection mapping library. Along the way, he declared that he offers these tools not to facilitate the creation of exciting projects, but instead to make projection mapping so easy that people are no longer interested in doing it.

So yes, this has been done at least once (this is, after all, ISAM 2.0). While we should be cautious about the tacky or facile use of a technical process to gloss over creative shortcomings, it follows that if you can, as Marius Watz says of algorithms, “make it rock”, go right ahead. So perhaps ISAM is currently living in the dying days of projection mapping qua projection mapping, but it’s designers, as if aware of this tenuous position, have packed that hour-long set with enought moments of restless inventiveness to, for the time being, evade outright dismissal.

Furthmore, this is a great direction for live electronic gigs to be heading.  Consider the alternative: a dimly lit DJ nodding at a table?  Tapping on a laptop and turning knobs? No thanks: this is the future we were promised.

If projection mapping is on its way out, the rampant virality of J o n p a s a n g’s excellent Hyper-Matrix project for Hyundai indicate that white cubes make be sticking around for at least another lap.